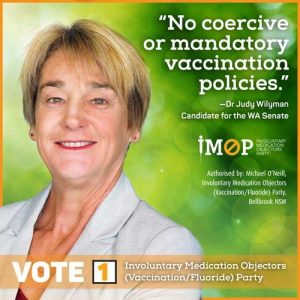 In the federal election held on May 18 2019 I stood as a Western Australian Senate candidate for the Involuntary Medication Objectors (Vaccines/Fluoride) Party (IMOP). Our party supports the right to fully informed consent to all medications, without financial or other coercion. Our body is our choice, not the governments choice, to decide how many drugs/vaccines we use in our bodies, without penalty.

It is our fundamental human right to have bodily integrity and fully informed consent to medications. This is a principle of the ethical code of conduct for doctors and it is protected in all the international human rights covenants. The IMOP party stands up for your rights and for this principle of medical practice if you vote for us in the Senate. We had candidates in Qld, NSW and WA in the 2019 election.

Currently there are 12 vaccines that the Liberal government has linked to a maximum of ~$26,000 of tax benefits plus early childcare enrolment and some employment situations. But this can be extended at any time to more vaccines as the goverment is recommending 16 on its national program.

The 15 Minute Speech that I gave at the IMOP launch describing the political issues that need addressing to design good public health policy.

Vaccines have always been a choice in Australia for 60 + years before they were mandated in 2016 – in social welfare policies not health policies – when there was no increased risk from these diseases.

I am a health educator and I present health information at conferences and in public seminars on the control of infectious diseases in Australia and human rights in vaccination policies. By standing as a candidate for IMOP I hope to give a voice to the many concerned Australians, including doctors and nurses, who want to maintain their choice in all medical interventions according to the medical code of conduct.

Vaccines are described as ‘unavoidabley unsafe’ by the US government and the risk depends upon your individual genetics. There are thousands of deaths and adverse health outcomes from vaccines every year but these are not reported in the mainstream media.

These mandatory and coercive government policies are unethical and they have the potential to destroy the genetic fabric of society. As a candidate for IMOP I am committed to ensuring there is objectivity and transparency in the design of health policies in Australia and in the reporting of health issues in the mainstream media. This is essential if we are to protect the health and quality of life of the human population.

In 2019 Judy Wilyman was nominated for the Australian of the Year for her work in advocating for open and transparent debate of Australia’s public health policies and for choice in vaccination and other medical interventions.